If you're a history buff hunting for your perfect holiday, we're here to help! We've grabbed our fossil brushes, done a little digging and put together some of our top destinations for delving into the past.

Make plans for monuments that transport you back in time, preserved as impressively as they were hundreds of years ago. Or head to a historic site where your mind is the only tool you'll need! Putting your imagination into overdrive to picture gladiators and performers entertaining the masses in massive arenas. Your historic holiday is waiting to begin… 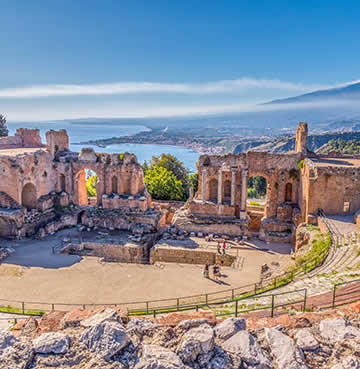 Sitting at the tip of Italy's toe, Sicily has an enviable position that has attracted plenty of empires. At one point or another, Greeks, Romans, Arabs, Spanish, British, Normans and the Byzantine have all arrived on these shores with plans to capture the island's beauty for themselves. As is the case in so many historic countries, it's the Greeks and Romans that have left the biggest mark on Sicily.

In Selinunte an acropolis stands tall among the ruins of 2000 year old temples. Once the heart of a thriving city, they're remarkably preserved to give you a glimpse at Greek Sicily. Taormina is home to another slice of Hellenic history, with a stunning theatre sitting in view of towering Mount Etna. Grab a seat, take in the mountain and imagine Greek tragedies unravelling before your eyes. Actors are replaced by brave gladiators in Neapolis Archaeological Park, where a Roman theatre sits among more intriguing ruins. And if art's the order of the day, Villa Romana del Casale is home to fascinating mosaics dating back to the 4th century. 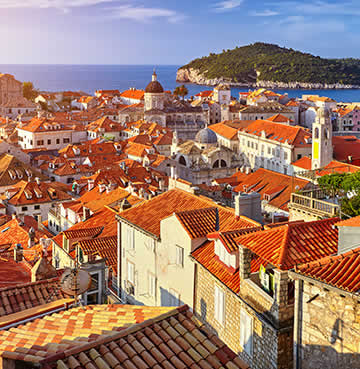 There's pockets of history dotted all across Croatia, with the whole country feeling like a playground for those of you who just love the past. The Roman's artistic and architectural flair can be felt once again in Split, where the 4th century Diocletian's Palace remains as impressive today as it was then. Although Croatia takes plenty of credit for this masterpiece, with its stone building blocks coming from the nearby island of Brac. Pula is home to one of the finest Roman amphitheatres anywhere on the planet! So if you'd love to do as the Romans did, set a course for this corner of Istria.

In Dubrovnik Old Town a birds-eye view of the past awaits. The towering walls overlook historic buildings, the gleaming Adriatic and the homes of the locals who still live there. The beauty of a stroll around the Old Town is that you'll see how the bustle of modern life wraps itself around ancient buildings and monuments. There's even cafés dotted along the walls, so you can quench your thirst and rest your feet as you drink in Dubrovnik's history. 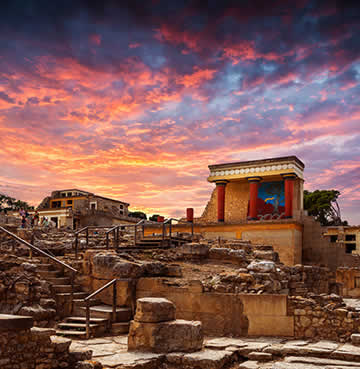 History in Greece is a curious thing – not only are there physical monuments to feast your eye on, there's myth and legend entwined with the past. Fascinating tales that let your imagination run wild with fantasy. The Palace of Knossos on Crete is the perfect spot for a little of both. Its ruins are propped up by striking red columns, letting you peak behind the palatial curtain. But it's the myth attached to this monument that really lights a fire for history lovers – this is the supposed setting for the scene of Theseus and the Minotaur. The fascinating tale of the beast and warrior battling within the winding labyrinth, we won't spoil the ending – you might not have heard this story before…

According to legend, one of Halkidiki's peninsulas was created by a God throwing a rock. Myth has it that Kefalonia's name came from Kefalos - who arrived on these shores, conquered the locals and crowned himself king. Peeling back the layers of Greek history, your mind starts whirling as you picture these fascinating tales unfolding. Give your imagination a rest and enjoy a stroll around Corfu's Old Town, home to Venetian forts and architecture tucked among traditional buildings. Or head for Rhodes, where an acropolis and the Palace of the Grand Master of the Knights of Rhodes awaits. This title might seem a little lengthy and indulgent, but with a glimpse of the remarkable courtyard and towers it all makes sense. 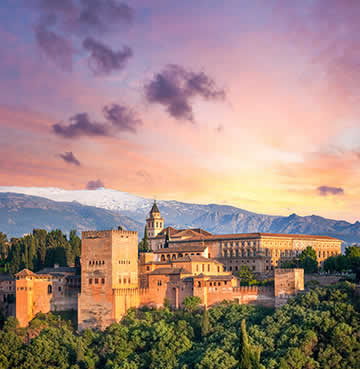 Defensive fortifications meet palace grandeur in the historic monuments of Almeria and Andalucia. Hilltop positions hint at the original purpose of these stunning buildings, which still showcase their protective prowess. But it's the regal touches, the royal flair and decorative delights that really catch the historic eye. In the Alcázar of Seville two palace sections were added to the fort, becoming a royal residence in the 13th century. Enter through the Lion's Gates, pass through the courtyard and explore the immaculate buildings for yourself. Curving archways, gleaming pillars and delicate decorations are a mesmerising sight – the beauty here lies in the level of detail you'll find inside.

Granada's Alhambra Palace has a similar story to tell, starting life as a fortress before palatial renovations in the 13th century. Here it's the outdoor spaces that are most likely to cast a spell, earning a place in your historic heart. So expect to get caught up in the courtyards! The Court of the Lions is home to a spectacular fountain, surrounded by impressive statues of the 'King of the Jungle'. In the Court of the Myrtles it's the mesmerising pond that immediately grabs your eye, reflecting the vibrant greens of the surrounding bushes. Malaga's Alcazaba Fortress offers more of the same, with one special twist – here you can climb the defensive walls that encase this historic treasure. Wonderful views of Malaga are all yours!

We've got plenty more history for you to sink your inquisitive teeth into! How about a peek behind the curtain of Cypriot past? Or a whistlestop tour of ancient Greece? Or maybe you're just ready to start planning your next amazing villa holiday?