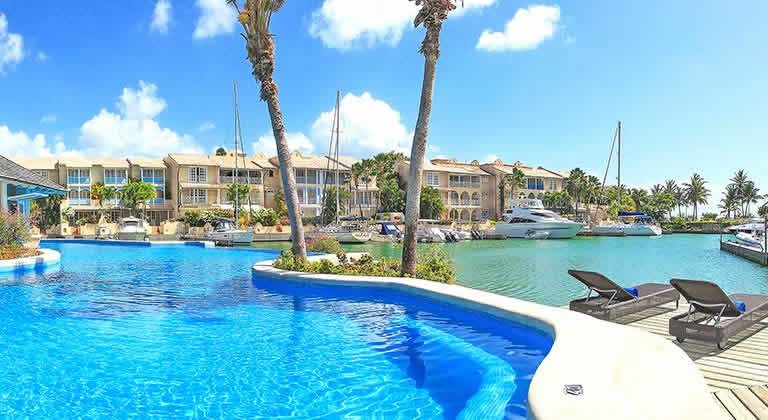 The resort of Port St Charles is located just north of Schooner Bay, with the lovely sweeping sands of Heywoods Beach running along its sea-facing side. Gleaming craft of all shapes and sizes enter the chic marina through a narrow passage beside the beach, berthing right alongside the rows of elegant townhouse style residences. A number of mega-yacht berths are located on the offshore breakwater, along with a couple of mooring buoys for any exceptionally long luxury vessels. The smart villas and apartments at the marina overlook the stunning lagoon, with some also facing the turquoise waters off Heywoods Beach, each with their own berth to tie up their boat after a day on the water. The resort’s impressive yacht club, bar and restaurant is built on a man-made island and linked to the mainland by a bridge. Its charming sun deck, with steps leading down into the sea whenever you feel like a cooling dip, is a great place to watch the toing and froing of the various boats with a lovely view of the beach and along the coast.

Our most popular villas in Port St. Charles

We couldn't load the villas for Port St. Charles. Please, check your internet connection and reload this page.