Costa Blanca calls to lovers of sun, sea and sand. But if they come for the coast, they stay for the perfect holiday package - a buzzing urban scene, old town tradition, majestic mountains, verdant valleys and a culture and cuisine to crave. 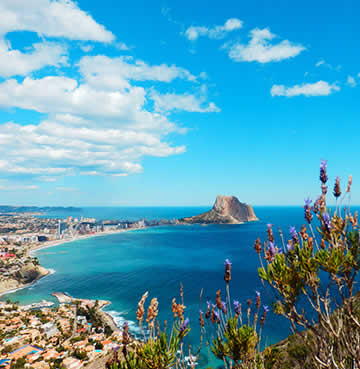 Say 'hola' to captivating Costa Blanca, with something for all holiday habits! Veteran resorts have every imaginable amenity to entertain even the most voracious visitor, while lower key but no less lovely are old-heritage fishing villages and hilltop hideaways where Spanish tradition still rings true.

Yes, for Costa Blanca holidays are a way of life. Its sandy swathes of fine white sand are the stuff of postcards, but Mother Nature is also a mountaineer, and a stone's throw from Costa Blanca's Blue Flag beaches are magnificent mountains that hail to hikers, walkers, cyclists - and those who want to see time-honoured towns and venerated valleys for themselves.

It's true what they say, opposites attract, and here is the complete costa of creature comforts, natural wonders, hints of history and a heady cocktail of cosmopolitan culture.

With over 320 days of sunshine a year, holidays in Costa Blanca are pretty much a shoo-in for 'scorchio' summer sojourns. In fact, the resort of Javea has the enviable reputation of sunniest spot in Spain, clocking up the most hours of rays of anywhere else. If the doctor ordered vitamin D this is certainly the place to be. Thanks to its unique geography its south-easterly aspect welcomes warmth from Africa across the Mediterranean, while its coastal mountains contain it. The result, peak summer temperatures happily hitting the 30°Cs, and early spring sun pushing the mercury to a very temperate 21°C.

Things to do in Costa Blanca 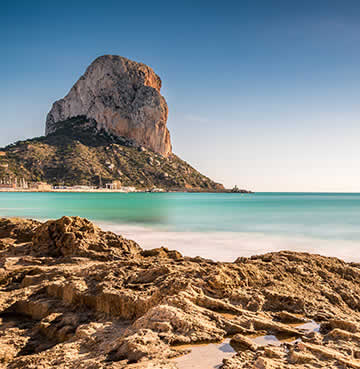 In one of Europe's premier holiday hotspots you certainly won't be short of things to do! The challenge instead will be working out what can be crammed into the ultimate itinerary. Naturally Costa Blanca's beauteous beaches should top the bucket (and spade) list. From fine white 'playas' with palm-lined promenades to intimate coves, a beach a day keeps the doctor away.

Blue Flags fly high throughout the coastal resorts, overlooked all the while by the commanding Peñon de Ifach. Towering above the beach at Calpe, it's easily visible for miles around - the principle postcard picture epitomising Costa Blanca holidays. To conquer its 332m summit and crown yourself king of the Costa is a (perfectly-achievable) must-do. A hike through Spain's smallest national park plants you within some of Mother Nature's favourite flora and fauna. Even if you're not a naturalist you'll still be wowed by the panoramas from the peak, so lugging your camera along is worth the extra effort.

If you're riding the wave of exercise-endorphins, why not take to the sea to get your next fix? There are watersports and aquatic activities aplenty. The crystal, calm waters are particularly suited for snorkelers and scuba divers to take in the beauties beneath the waves as well as above. For higher altitude adventures cycling, hiking and walking hit their peak in the glorious Jalon Valley, although you're more likely to stop at photo-ops than set a new PB in this stunning mountainous landscape of olive and orange groves, vineyards and so-Espanyol villages. 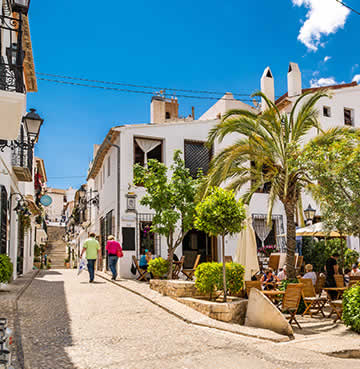 Still, we're sure you've earned a Sangria or two, as well as some holiday R&R. Get it by the bucket load at the beach resort of Javea. Arenal is the name of its own Blue Flag beauty, with a promenade behind packed with ice cream parlours, shops and eateries - holidays are all about indulgence after all. When you're refreshed and recharged, take a stroll into the delightful historic centre. Its narrow streets and buildings of golden "tosca" stone are brimming with old-world charm and historic treasures.

Similar trips to the likes of Denia, Altea and Moraira promise more of the same and are proof that you can't have too much of a good thing. Denia Castle presiding over a now-peaceful harbour and the amazing 'azul' domes of the Parroquia Nuestra Senora del Consuelo church in Altea make splendid shots in any Costa Blanca holiday album and remind us that long before tourist travellers came the history here was a rich and varied one.

With culture cravings satisfied family-fun is still far from over. What kind of holiday hotspot would 'Blanca be without more than its fair share of waterparks and adrenaline-pumping theme parks? The 'Benidorm bug' is thriving here, with every attraction and amenity imaginable for a 21st century sensational holiday!

Things to do in Costa Blanca 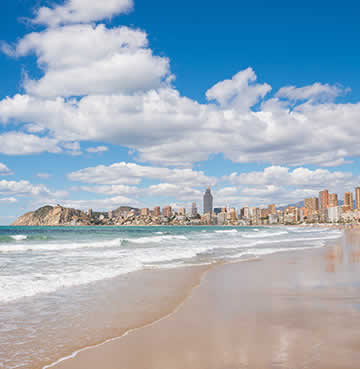 It's 'Blanca' by name, 'Blanca' by nature along the sublime shores (all 200km of them!) of this coveted Costa. Sun worshippers heap their praises on fine white sands and crystal turquoise waters. Choosing a handful of beaches to crown 'best' is akin to picking a favourite song. There are just too many to choose between - 170 to be specific, with Blue Flags by the dozen - from sand, to shingle, to pebble, from the smallest shore to the biggest beach beauty.

Beauty truly is in the eye of the beholder here. Some are calm crescents that are no less lovely for being lower key. Meanwhile some sands stretch by the kilometre and boast a buzzing vibe that comes complete with every amenity demanded by civilisation-savvy beach bums. One of the latter is Levante in Benidorm - naturally. It's no coincidence that this tourist treasure has sprung up around 2km of pristine sand and sea. With sky scrapers rising up to the blue above and the mountains beyond, this is Costa Blanca's answer to Rio.

Generally speaking it's along the southern stretch that you'll find the most bustling resort-backed beaches. Poniente is a near neighbour of Levante, while La Fossa in Calpe is another favourite with famed Peñon de Ifach dwarfing even high-rise hotels.

To the north the coast turns wilder and greener. La Granadella near Javea is no less popular despite trading sand for shingle. Here a wooded hilly backdrop plunges suddenly to the shore, trying but failing to enclose it as views out across the Balearic Islands peer through. Under the water is just as impressive, so make sure you pack your snorkel alongside your sun cream. Keep cove-hopping north until you reach Denia and its own bevy of beaches, where golden sands compete with the Montgo National Park for the status of natural wonder extraordinaire! 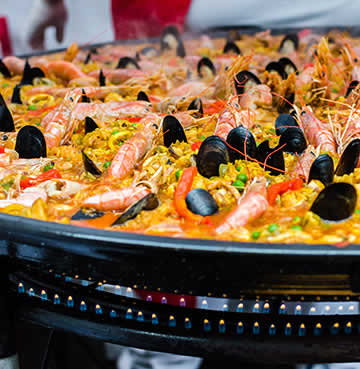 Unfortunately for sun seekers, beach bodies are likely to suffer in Costa Blanca where gastronomy is too much of a temptation! In this cosmopolitan Costa it's unsurprising that the menu is equally international, but the best culinary creations come from closer to home. Ingredients straight from the source mean freshest is naturally best. That goes for olives (and olive oil), almonds (which make delicious almond-baked desserts), Jalon Valley wine and oh-so sumptuous seafood!

Paella though, wins the prize. This signature Spanish dish is born and bred in nearby Valencia. The special 'bomba' rice required swells with succulent flavours and is grown in the marshes of nearby Pego-Oliva - worth a visit if food trivia is your cup of tea. Numerous other rice dishes grace menus, while tapas too must feature on all good foodie's forks.

Take a tip and dine Spanish-style. Paella is locally regarded as a lunch dish - and a good plate of carbs makes for an even better afternoon siesta! Make time for tapas in the early evening; here the locals eat late and a few plates by the Mediterranean will 'tide' you over until 10pm or so, when the real dinner party begins. 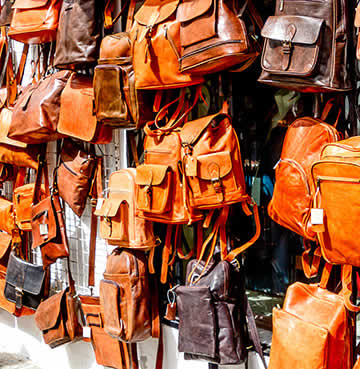 Naturally you'll want a memento of your Costa Blanca holiday and there are any number of shops, boutiques and markets only too happy to oblige. The fishing town of Denia - hereafter known as 'designer Denia' - might just surprise you with its prestige-brand stores. Of course it has its fair share of souvenir shops, like all the principle resorts. Stocked floor to ceiling with local handicrafts, leather, colourful ceramics and twee wickerwork pieces will happily fill a corner of your suitcase.

Those looking for a more sophisticated souvenir are best ambling the Old Town streets of Javea, where art shops and galleries attract culture-cravers. Serious shoppers meanwhile turn to the mecca that is bustling Benidorm. Here La Marina Shopping Mall sells everything from clothing to electronics, and everything in between.

Local markets though, are where the tourists normally find their treasures. Altea is perhaps the favourite, although stalls spring up nearly every day of the week from resort to resort. As well as handicrafts, some specialise in the freshest local produce, as well as cakes and confectionary to tickle those taste buds and get the barbecue blazing back at your villa. 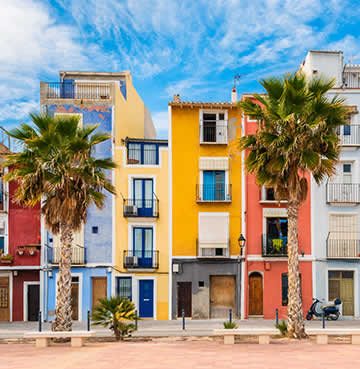 Road trip! These two little words convey a bevy of anticipation and excitement, especially in Costa Blanca with 200km of captivating coast, natural parks and majestic mountains. Exploration is the name of the game, and with a hire car the rules and the schedule are yours.

With resorts and promenades well-trodden, wheels are the way to make the captivating climb into the Jalon Valley to discover any number of time-honoured towns and villages. Historic Gudalest with its cliff edge climax, Moorish Adsubia surrounded by orange groves, Benidoleig with its Calaveras Caves, Alcalali, Parcent… These picturesque places will escape most of Benidorm's believers, but not those savvy seekers who take to the open road.

When you've had your fill of verdant valleys and magnificent mountains (is that even possible?), swap olive groves for sea vistas and a fresh breeze as you take the coastal road. From the south at Pinar de Campoverde among the pines and the stunning valenci, through the heartlands of 'Blanca, right the way through to Valencia in the north, this is a journey through an eclectic ensemble of what makes Costa Blanca holidays just so spectacular.

Find Out More About Car Hire