A late bloomer in terms of UK travel, Croatia is now well and truly trending! The cool kid on the block, its mix of urban hotspots, luscious landscapes and island-speckled shores have put the crescent-shaped country firmly on the map.

Find your Croatia Holiday About Croatia 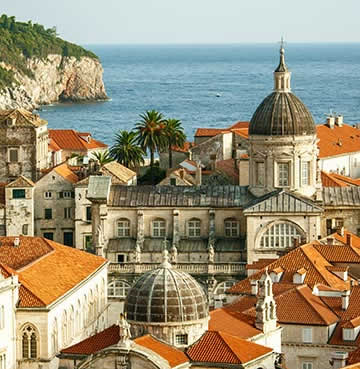 Holidays in Croatia are all about the best of both worlds. Indulge in the glitz and glamour of southern seaside town, Split, or embrace authentic Croatian life in the heart shaped peninsula of Istria. Boasting one of the longest coastlines in the Mediterranean, this craggy masterpiece has been crafted to perfection by the sapphire sea.

Sail away to your own piece of paradise and find your perfect holiday hideout on the islands of Hvar or Brac. Spilling over with natural beauty, here you'll soak up some of the sunniest spots in all of Croatia. Lapped by azure waters of the alluring Adriatic, the white shingle beaches are every bit as bewitching as you've imagined.

Last but not least, step foot in a real life fantasy land – literally. Dubrovnik's iconic Old Town and its medieval maze of limestone-paved pedestrian streets is a treasure trove of cultural creations. Known for its starring role in Game of Thrones, fans will recognise much of the city's amazing architecture as the infamous King's Landing.

Typically Mediterranean, Croatia enjoys warm summers and mild winters. In peak season it's not uncommon for temperatures to soar well into the 30°Cs, with sea temperatures at an irresistible 24°C. Beach lovers will be in holiday heaven, with over 12 hours of sunshine delivering that much desired dose of daily vitamin D. If you're more of an outdoor explorer, make the most of cooler climes during May and September and get back to nature with a visit to some of Croatia's jaw-dropping national parks. Beat the heat with an off-peak holiday and try your hand at a whole host of action- packed activities.

Things to do in Croatia

Get seduced by spectacular scenes that sprawl out as far as the eye can see. While away the days at chic marinas and harbour hotspots. Amble through perfectly preserved pieces of history, admiring the craftsmanship as you go. Live life on the edge and conquer magnificent mountains. Whatever your holiday wish list might look like, Croatia will satisfy even the fussiest traveller! 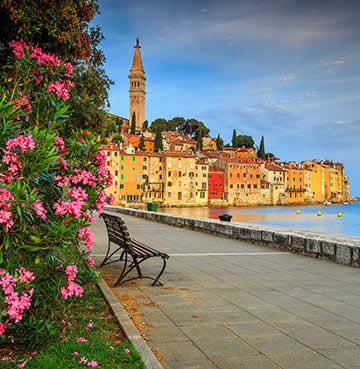 Welcome to a heart-shaped piece of holiday heaven. Teeming with national parks and UNESCO World Heritage Sites, the picturesque peninsula packs a punch when it comes to things to do. A medley of charming medieval towns dot the dramatic coastline, from romantic Rovinj to Istria's capital Pula. Each spot showcases a mix of architectural styles, beautiful bell towers, mellow marinas and maze of cobblestone streets. Pula's Arena is perhaps the crowning glory of the region, and looks the spitting image of Rome's own Colosseum.

Proof that Croatia's beauty isn't just on the outside – the interior is blessed by historic hamlets, verdant rolling hills and rustic farmlands. Nature lovers will jump for joy at the sheer amount of wild trails that wind their way through valleys and across viaducts. Walkers won't know where to begin! Of course, there are all the usual holiday hits too – with golf courses, waterparks, wineries and beautiful beaches to boot.

View All Villas in Istria 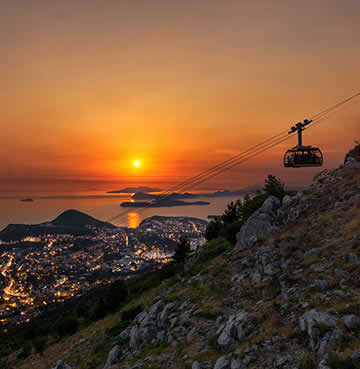 When you picture Dubrovnik, chances are you're thinking of the Old Town. Red-roofed, honey-stoned structures line picturesque pedestrian streets, and it'll almost definitely be love at first sight! Encircled by iconic walls, be sure to take the 2km trail that follows the ramparts around the city. Historical wonders sprawl out in every direction, and a keen eye will spy traces of Gothic, Renaissance and Baroque architecture all over. Highlights include Pile Gate, Bokar Tower, Revelin Fort, Stradun, The Rector's Palace and Lovrijenac Fortress.

Get a bird's-eye view of the medieval marvel and take the cable car to the top of Mount Srđ. Not only are the views incredible, if you time your trip for late afternoon you'll be able to explore, grab a bite to eat and set up camp for a showstopping Croatian sunset. The walled wonder takes on a new lease of life after dark, and the Old Town is lit to perfection with glowing golden tones. One thing's for sure, you'll need your camera poised and ready for action at all times!

View All Villas in Dubrovnik 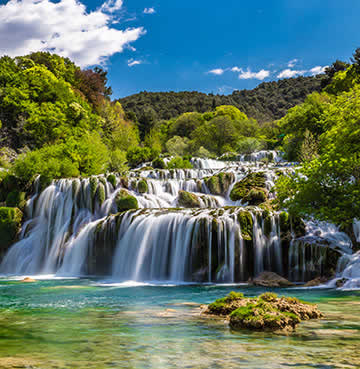 You may be noticing a theme here, but nowhere does pristinely preserved medieval towns quite like Croatia – and Split is no exception. The Old Town should feature top of your list, not least because of the UNESCO World Heritage Site of Diocletian's Palace. This piece of prime Roman real estate resides on the harbour side, and is the beating heart of the city. Must-see landmarks include the Split Cathedral, four town gates, Vocni Trg and the Venetian octagonal tower.

Split makes a great base for a day trip to Krka National Park. Not quite as well-known as the ever popular Plitvice Lakes, you'll be able to escape the crowds and get that bona fide back to nature feeling! Swim in fresh emerald waters and admire the rumbling falls as they cascade down the mountainside. Water babies will appreciate a day of island hopping or an evening of sunset sailing. Thanks to Split's superb location, it's a gateway to the greats like gorgeous Brac and Hvar.

View All Villas in Split 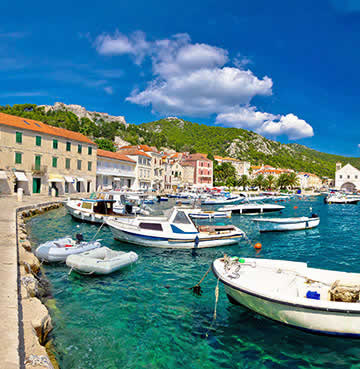 Set sail for paradise with a stay on the Dalmatian Islands. Life moves at its own pace along the craggy coastline, with hidden bays and secret coves just waiting to be discovered. Tradition lives on in timeless towns while harbours transform into summer hotspots full of yachts, celebrities and the hum of hedonism. Red-roofed architectural beauty rivals that of the mainland and you'll discover Roman ruins, Venetian creations and fantastic fortresses peeking out from luscious greenery. Hvar even has its very own UNESCO World Heritage Site in the form of Stari Grad Plain.

The Spanish have their siestas, and the locals in Dalmatia have fjaka. Maybe not quite as catchy, this mantra celebrates the art of doing nothing – and what better place to do nothing than on holiday? Blue Flag beauties and unspoiled shores set the scene for euphoric escapism. Simply roll out your towel and bask under blue skies.

Snorkelling and scuba diving are fast becoming some of the most popular past times on the Dalmatian Islands, not to mention a whole host of other wild and wonderful watersports. Underwater residents might not be quite as colourful as their tropical fishy friends, but water clarity is crystal clear and there are stacks of stunning shipwrecks to admire up and down the coastline. Mark the days' end with a spot of cocktail sipping and sunset swooning against a backdrop of ancient ports fringed by palms.

View All villas in Dalmatian Islands 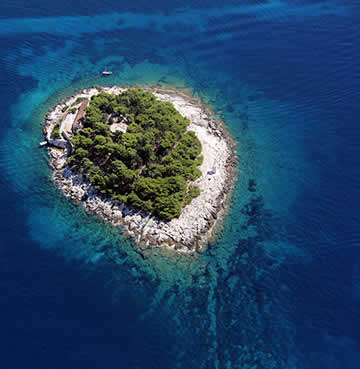 Countless pebble, shingle and sandy beaches sit along Croatia's 4000km of coastline. Jaw-dropping natural beauty comes courtesy of craggy limestone ridges and unspoiled island archipelagos. Rugged rock formations and picturesque peninsulas have been lovingly crafted by the Adriatic for thousands of years, with none more iconic than Brac's instantly recognisable Zlatni Rat Beach. The archetypal postcard scene, a 500 metre tongue of sediment stretches into the water, creating the most photographed strip of shoreline in Croatia. Other highlights include a day escape to the exotically azure waters of the Pakleni islands, just a stone's throw from heavenly Hvar, or Dubrovnik's very handily placed Banje Beach.

You'll hit the culinary jackpot with a holiday in Croatia. Hungry tummies are met with a mouthwatering medley of Mediterranean and eastern European influences. Tuck into all sorts of scrumptious seafood servings or treat your tastebuds to hearty stews, soups and meat dishes in traditional hilltop towns. Hardcore foodies should keep their eyes peeled for the infamous Crni Rizot (black risotto). Crammed with clams, mussels and other shellfish, the dish gets its distinctive colour from squid ink. Of course, less intimidating options are on standby for the more cautious diner. 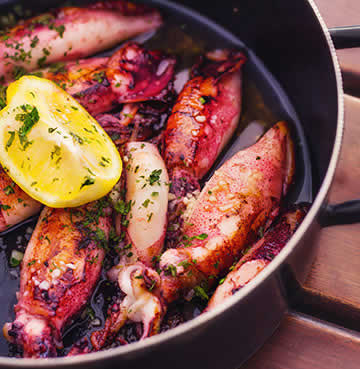 If coastal Croatia is known for its fishy creations, then Istria is fast earning itself a reputation for its most treasured commodity – the (not so) humble truffle. The potato-like mushroom has caused a major stir in the foodie world for years, and rural regions are regarded as some of the highest quality on the continent. Talk about bringing something to the table! You can even try truffle flavoured ice-cream in some of the more gourmet gelato cafés.

Whether a holiday isn't a holiday without a retail fix, or you're just keen to get your groceries from little markets like the locals, there's something for every kind of shopper in Croatia. Unique boutiques are tucked away on traditional streets, while high-end designers house their gorgeous garments in full view on pretty prominent squares. You can pick up gifts and souvenirs from plenty of places. Lace doilies, filigree jewellery, salt, honey, wines and local art are regional products that are unrivalled, and well worth hunting down.

Istria's cold-pressed olive oil is one to add into your cooking repertoire, along with Dalmatia's divine sea salt – reportedly boasting more than 75 minerals! The luscious lavender fields of Hvar produce countless crowd-pleasing products, from sweet smelling soaps to small minced bags of the flower. Handmade leather designs are dotted around in the form of wallets, briefcases, flip flops and bags, as well as locally made accessories. Keep an eye out for necklaces fashioned from Adriatic coral, you'll only be able to get them in Croatia! 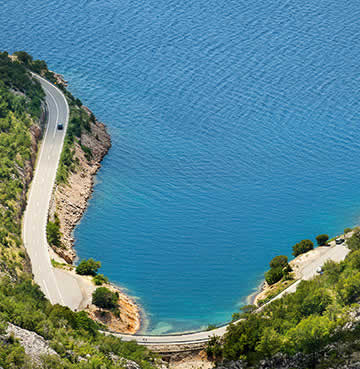 Dubrovnik's Gundulićeva Poljana market lies in the heart of the Old Town. Hugely popular with both locals and travellers alike, it's the perfect pick-up point for picnic goodies and villa kitchen supplies. Open daily, stock up on dried fruits, seasonal vegetables, homemade sweets, figs, grappa and other traditional tipples, as well as all the usual open-air market items.

A holiday hire car is undoubtedly the best way to see Croatia's hidden treasures and lesser-known countryside spots. Off-the-beaten-track rural roads are a wonderful way to enjoy a windows down road trip! Navigate the rolling hills and verdant valleys on heavenly highways and savour the sweet scents of pine-carpeted scenes. Coastal cruising is a must too, with the road connecting Rijeka and Dubrovnik often hailed as the loveliest of the lot.

From architecture to adventure and vice versa, driving in Croatia gives you unbeatable access to all the best bits. Ultimate freedom is yours as you stumble upon paradisiacal places and pinch-me pretty panoramas. Set out on an early morning exploration to Krka National Park (an hour away from Split), visit neighbouring Montenegro from Dubrovnik, or drive deep into Istria's undiscovered interior.

Dark horse of the festival scene, Croatia packs a punch with its chock-a-block calendar of music, folk and foodie events. Clear a day (or afternoon) in your holiday diary for unmissable entertainment. Unsurprisingly Dubrovnik's historical city plays host to countless legendary line-ups, from The Good Food Festival and FestiWine to the self-titled Summer Festival that runs yearly from the beginning of July until the end of August. Here you can expect a cultural concoction of music performances, dance, theatre and open-air cinema.